Golf and Time and why Rotella is wrong

I have long been fascinated with the construct of time and its relationship with peak performance golf. Without timely procrastination, I start this essay revealing that in essence, time itself does not exist. What does exist however, is the human attempt (and quite a good one) to translate and convert what is only energy into a manageable and measurable system. In the same way a cartographer ‘lines’ the latitudes and longitudes of north, west, south and east skillfully on a map of natures unorganized wiggles, man has similarly netted and captured energy with a similar manacle called ‘time’.

We calculate time through ‘light’ years (light is the energy), through the yearly orbit of the Earth around the Sun (the energy of gravity) and we have our own ‘human’ time on this planet governed solely by the energy left in our bodies.

The most nonsensical recent fad of course is the fascination of ‘time’ management. You cannot manage time because you cannot speed it up, you cannot slow it down and you cannot stop it……why? Because it does not exist, time is simply is unmanageable.

What we can manage however is the rate of energy we use and this in itself alters the observational effect of time.

For example, it takes a Boeing 777 seven hours to fly from JFK to London Heathrow, approximately 3,400 miles. So that’s 3,400 miles in seven hours. Covering 17,500 miles in just one hour, the energy of the Space Shuttle clearly illustrates that time can only reveal itself through the difference of energy.

So how does this relate to peak performance golf?

Why Rotella is Wrong

Something has gnawed away at my mind for a while and I feel that I have reached a conclusion I feel comfortable standing by. With its origins in Eastern philosophy, gurus within a myriad of vocations have shouted from the rooftops that the ultimate state of consciousness one should be in whilst wanting to flow is a state called ‘The Present’. Have a look at this quote from Bob Rotella giving a student his wish list:

‘I will stay in the present. I won’t speculate in the middle of the round about what my score will be, or where I’ll stand in the tournament. I’ll stop worrying about breaking 90, 80 or 70. I will not critique or analyze the shots I’ve taken. I will focus on each shot as it comes, and that will be the only shot I’ll care about. When it’s over, I’ll see how I did’.

Do you know that Goldfish have a four second memory? So, there they are, circling the bowl like two geriatric NASCAR drivers when one fish turns to the other and says: “Oh look, a Castle! Isn’t it nice!”. ‘Yes’ says the other Goldfish, “It’s amazing”. As they continue around the perimeter of the bowl the second Goldfish suddenly shouts” Look, I can’t believe it, a castle!”

I want to tell you something: if you were perpetually in the present moment as the gurus prescribe, your memory would be considerably worse than a Goldfish. In fact, it would be a lot worse because you wouldn’t be able to differentiate from one moment to the next. You would be in a constant state of Alzheimer’s wandering around not knowing if it was New York or New Year. To be in the present you would have to have no semblance of the past and no anticipation of the future.

No great player has been in this competitive stupor of being totally present as Rotella describes above. Jack Nicklaus constantly spoke of: ‘I knew I had two par 5’s coming up’…Tiger had to hit his ‘X’s and Faldo said, “I’d better play the best four holes of my life”.

If you are not aware of how you are playing or in the case of the Rotella quote: NOT ‘speculating’ during the round, how can you perform the essential task of mid round fixing or strategic adjustment relative to the field?

Were the great industrialists of the 18th Century not called ‘Visionaries?’ Do actors and actresses not practice their lines for a ‘future’ reproduction of those words? Do Formula 1 race car drivers or chess masters not anticipate their competitors next ‘move?’

Did Wayne Gretsky not say: ‘Skate to where the puck is going……not where it is.’

All great sportspeople perform what I call ‘Frontloading’ the mind. Their internal narrative incessantly whispers: ‘I intend to, I will do……I can do’.

There could be an argument made that being ‘Present’ didn’t mean time at all; being present might have simply meant an alertness of the mind in the same way a pilot has whilst accelerating down a runway. But even in that very real scenario, pilots are trained to anticipate events such as engine failure and wind shear and so therefore, even they are ‘front loading’ an anticipatory event.

If we substitute ‘Present-ness’ for ‘Awareness’ we may be getting closer to the truth since awareness breeds the focus of real time observation. This is to say; your state of mind would be similar to a security camera pointing at a shop counter; it simply watches without reaction yet with a total awareness of every detail. Translating this to golf we can immediately see a benefit during the assessment stage of a shot; to be aware of environmental factors that require your consideration would need a stillness of mind. One cannot reflect in a streaming water.

But even here, present-ness breaks down. You are not a mechanical device; like a match to gas, your brain instantly fires up images of possibilities, feelings required and excitement at expected results. Why?

Why is it so difficult for the brain to remain in the narrowest stream of time zones called the present? The answer is evolution.

As the highest specie on the planet, our brains have evolved (especially in the last 120,000 years) whereby we can quickly respond to whatever our imagination demands (our survival) or whatever our imagination anticipates (danger). We are simply not built to be transfixed and locked into the present moment. This is where I get beside myself with anger……

Expectation……the supine mantra of golf gurus who don’t create physical results plead with us to: ‘manage our expectations’ which is simply another way of saying ‘always expect nothing but if something good does happen……be grateful’. Total diatribe.

You should be placing the highest demands on yourself possible. Is this being a realist? Yes, because by continually pushing the envelope, you know that no stone was left unturned when that inevitable day of career reflection happens.

Without future expectations, you cannot start a rational form of inquiry when they are not met and you fall short. Expectation is a constant and essential attitude that forces you into a very personal and objective mission and then purges the revision of one’s progress relative to it. If a person ever tells you to manage your expectations, walk the other way and surround your ‘self’ with better company.

Lastly, how does this time / energy relationship manifest in the physical realm?

The word anticipate in Latin is anticipātiō which is the root for Pre (prior to) concept (to organize) tion (action). If there is one rule that every golfer from beginner to Major Champion should live by it is the activity of the ‘Pre-concept-tion’ of every shot. This involves predicting outcomes, strike profiles and shot shapes all of which are impossible whilst residing in the present.

In the example of getting ‘stuck’ over a shot, the victim has lost their flow because there is simply no directive that has been married into a routine. There is nowhere no go, your brain is addled and your eyes are motionless.

If intention is the forerunner before action, being still and present is surely the state of nothingness before more nothingness. Note: there is a benefit in being within this state of mind but not when competing.

Scientifically we know that when the brain functions in an Alpha cycle, we can manifest physically what our minds can demand on us mentally. This is 100% tangibly true.

Jack Nicklaus ‘went to the movies’, Gold Medalist Linford Christie visualized a Tiger chasing him down the track. In the most compelling example, Welshman Lynn Davis, who won the 1964 Olympic Gold medal for the long jump, used his mental energy wisely (not time!) whilst sat in the dugout waiting for a rain storm to pass by. Time and time again he foresaw himself sprinting down the track counting the number of steps before launching himself at a perfect trajectory. With this much clarity, his body was instructed to push forward and chase that future event as though it had already happened. This is ‘frontloading’ the mind. 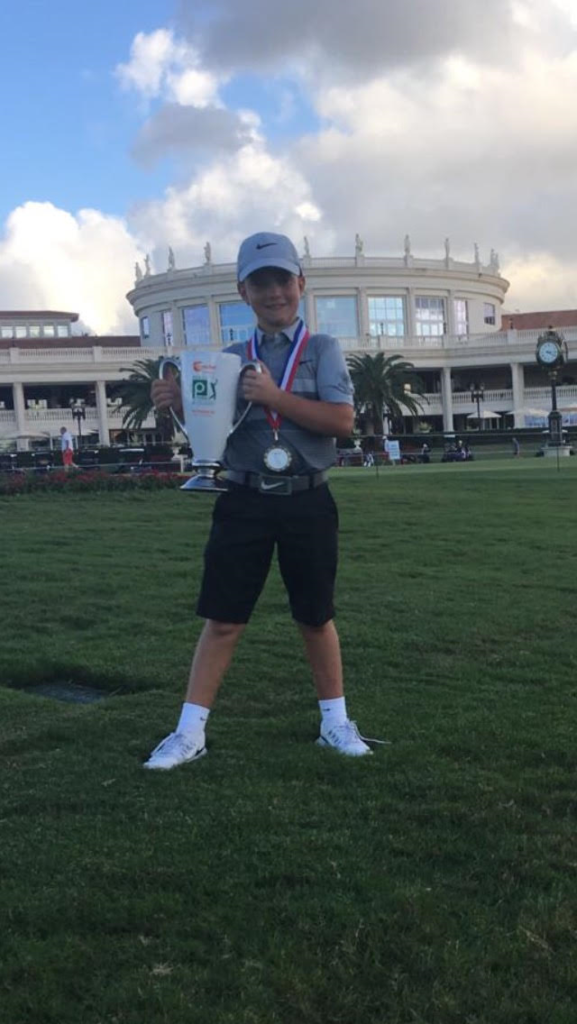 To end, I want you to meet my student, young Frank Kennedy who is 11 years old. Last November he won the world Publix Championship in Doral by beating the current junior world #1 down the stretch (Rory won this a year later than Frank). For 7 consecutive times during practice we missed the 18th green and flew the ball into the water. Time and time again we rehearsed the visual intention of hitting the green whilst weaving the physical requirements to do so into a practical situation. I’m proud to say that he parred 18 in that final round to win by a shot.

The folly of staying in the present can be summed up by this quote:

‘How nice it is to do nothing and rest afterwards’.

Use your energy wisely and it will be Time that becomes your servant.